Foodie Gifts for the Festive Season 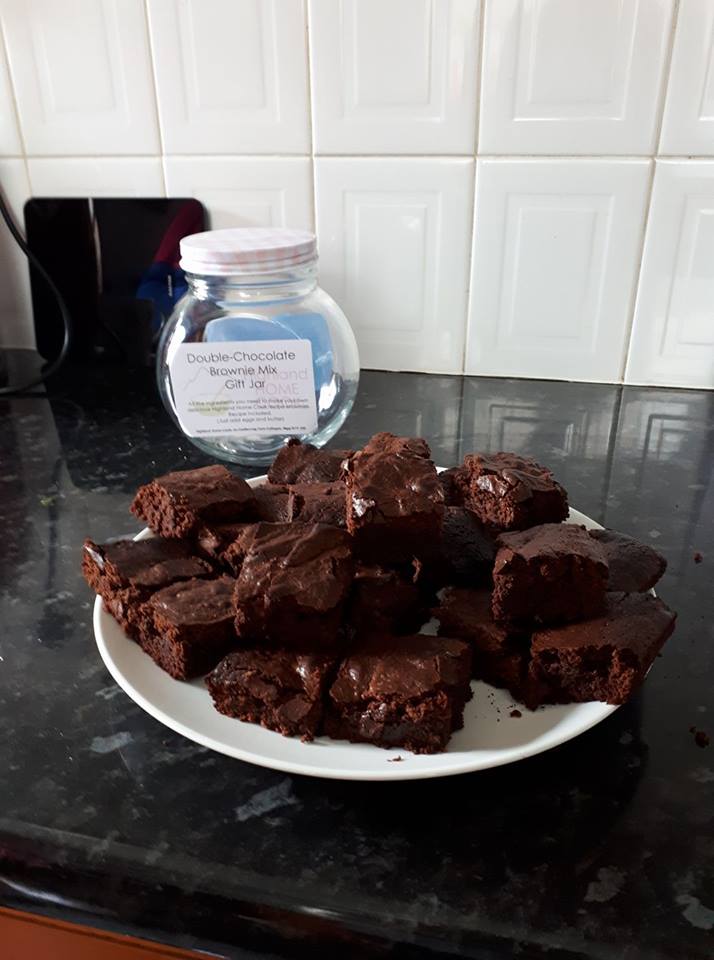 In the quest to buy less; to enjoy a ‘crap free Christmas’ as one campaign has it, or simply to reduce the amount of ‘things’ we buy people, you could do worse than consider a foodie gift.  I like Christmas.  I don’t want to do away with the festivities, the time and investment in family, the things we spend time doing which we don’t make for the rest of the year. But I want a simpler, less commercial Christmas.

I cook for a living, so you may think it’s easier for me to knock up a food gift.  Quite the opposite is true. As one of my busiest times of year it can be difficult to make time for present creation as well as the usual Christmas produce.  I do try and make some time for this if I can, though I also buy in food gifts from other small local suppliers.  It all helps to keep money in the local economy, support local indie businesses and avoid unwanted gifts going into landfill.

Some of my most popular festive gifts are as follows: fudge, brownies, Christmas cakes and puddings, speciality breads such as Panettone or Stollen and Biscotti.  Pickles, flavoured vinegars and oils, marmalade, jams and curds also go down well.  If the person you want to make something for doesn’t have a sweet tooth, cheese sticks, olive balls and marinated cheese balls all make tasty treats and are easy to make.

Chose something that suits your skill set and available time and you’ll have a festive treat to wrap in no time.  In fact, you can spare the gift wrapping and dress up a nice glass jar with a bow or a cloth top, some cinnamon sticks or star anise.  You can also buy coloured Kilner-style jars, which look festive without having to do too much else to them; the bonus is a reusable container that isn’t going to add to the mountain of plastic waste we already have.

If you really can’t face making something, don’t have the time, or don’t feel confident, a homemade ‘kit’ gift could hit the spot instead.  Gather together the ingredients to make shortbread, or cheese straws, or your own favourite recipe (minus any fresh ingredients) put it in a jar with the recipe, and hey presto, a foodie gift and a cooking experience in one.  Last year I made up my double chocolate brownie recipe into gift jars and it was very popular.

If the person you’re buying from isn’t someone who would appreciate a ‘do it yourself’ food kit, then seek out local suppliers who are making foodie gifts for Christmas.  Your chosen recipient is bound to be delighted with something with local provenance that they are unlikely to find in the high street shops.

Christmas can be a time of over indulgence, of course, but a judiciously chosen food gift, which can be eaten out-with the festivities, is sure to please.  If you know someone likes cheese or some other food you could always assemble a hamper of deli items.  This makes a great gift if you’re staying with people over Christmas and want to contribute to the household in some way, and makes a change from a bottle of wine.

If you fancy having a go at making a food gift for Christmas I’ve given a few ideas and the recipes below.  These won’t take too much time or skill, nor will they break the bank.  I hope you enjoy making your edible presents as much as your recipient enjoys consuming them.

I love ginger, and always include it in Christmas baking.  This recipe only takes a few minutes and can be used on ice cream, in drinks, and used to flavour dessets.

Put the golden caster sugar, 200ml water and ground ginger into a saucepan. Add the cinnamon stick and bring to a gentle boil

Simmer for 5 mins until the sugar has dissolved.

Pour into a 500ml sterilised bottle

Decorate with a cinnamon stick and ribbon if you like.

Will keep for a year.

Note:To sterilised the bottle wash in hot soapy water then place on a baking tray and put in  a low oven for 10 mins or until completely dry,  You can use a dishwasher on a hot setting if you have a lot of bottles and jars to sterilise.

This takes 15 – 20 minutes to bake but no time to assemble.  It produces a sweet/savoury nibble and keeps well in an airtight jar.

Mix the oil with the spices an salt, then stir in the nuts and drizzle over half the honey. Spread over a baking sheet and cook for 10 mins.

Remove from the oven and drizzle over the remaining honey, then return to the oven and cook for a further 10 mins.

Allow to cool completely then pack into a glass jar.

This appeared in a recipe magazine a few years ago that I have a subscription to.  I’ve adapted it slightly. It’s very easy to do but takes more time than the other recipes. Makes 2xLB jars.-

Saute the Chorizo in a wide frying pan for about 5 mins until golden and crispy at the edges. Remove the chorizo with a slotted spoon and transfer to a plate, leaving the oil that has been released in the pan.

Turn the heat down low and gently cook the onion in the chorizo oil for 15-20 mins or until very soft and starting to brown. Stir in the garlic, muscovado sugar, Sherry, maple syrup, soy water and chorizo.

Cook slowly for 35-40 mins, stirring occasionally, until thick and syrupy. Turn off the heat, leave to cool a little, then tip everything into a food processor. Pulse briefly to chop everything up into really small pieces.

Leave the mixture to cool before packing it into the 2 sterilised jam jars.

Will keep for up to 1 month in the fridge.

Serve with cheese or cold cuts.  Can also be added to various recipes.